Fifty years ago, Sarnoff Mednick defined the process of creative thinking as "the forming of associative elements into new combinations which either meet specific requirements or are in some way useful. The more mutually remote the elements of the new combination, the more creative the process or solution." Mednick argued that creative people have flat associative hierarchies: they are better able to access distant, remote associations. For example, when given the concept "table," Mednick predicted that creative people would be more likely to retrieve more remote associations such as "leg" or "food." In contrast, Mednick argued that less creative thinkers have a steep associative hierarchy, in which words with a higher associative strength (e.g., chair) would be more likely to enter their minds: 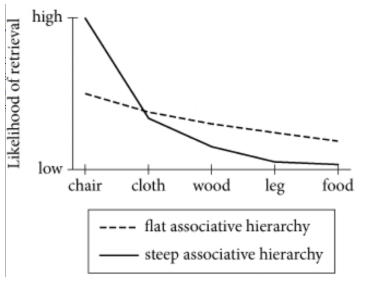 One tool that has been used recently to look at creative cognition is Latent Semantic Analysis (LSA), an objective scoring method where you can derive a measure of semantic distance. With LSA, you can quantify the similarity between words or texts based on statistical analyses of the responses of a large population.

Using this technique, Ranjani Prabhakaran, Adam Green, and Jeremy Gray found that "thin slices" of verbal behavior (single-word utterances) predicted creative cognition. In their "verb generation" task, a noun was presented every few seconds, and the participant was instructed to say the first verb that came to mind in response to the noun. The researchers analyzed the semantic distance of the responses using LSA.

They found that the greater the semantic distance of the noun-verb pairs, the higher the levels of creative cognition, story-writing ability, openness to experience, and creative achievement. Interestingly, they also found a relationship between semantic distance and traditional measures of "convergent thinking," such as IQ and working memory. This suggests that creative thinking doesn’t just involve combining distant associations, but also requires consciously accessing the associations.