Megan Thompson: One year ago, thousands of northern Californians were fleeing the Camp Fire, a huge wildfire that killed 85 people, destroyed 95 percent of the town of Paradise and burned more than 150,000 acres. Yesterday, residents and officials marked the anniversary with a small ceremony and 85 seconds of silence, one for each victim of the fire in a town that is still struggling to recover. San Francisco Chronicle reporter Lizzie Johnson joins us now from Paradise, California. So as I understand that you've been actually living part time in Paradise for the last year, doing your reporting. Tell us, what's it like there now, one year later?

Lizzie Johnson: The big emphasis is on rebuilding. So when you drive around town, it's not just burnt down lots and homes and buildings. It's a blank slate. It's driving past you know what looks like entire fields of empty dirt.

Megan Thompson: Do we have a sense of how many people are planning to return?

Lizzie Johnson: So there's no exact data. But the town manager did say that the town of Paradise has received about 500 building permits since last year. So that's the best estimate they have been since last November, 15 houses have been rebuilt. And keep in mind that 14,000. 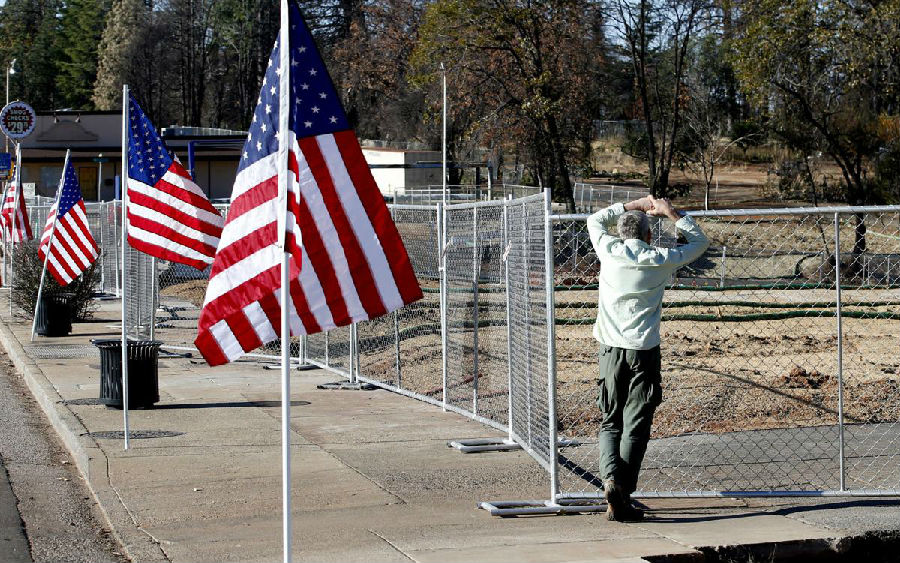 Megan Thompson: What are the people who are staying or returning, what are they saying? I mean, how are they feeling?

Lizzie Johnson: It's hard. The ceremony yesterday, officials were talking about how the amount of debris in Paradise after the Camp Fire was two and a half times what came down in New York City after the 9/11 attacks. So the fact that they've gotten rid of most of the debris and trouble place to rebuild. So I think a lot of people that I've talked with, they're frustrated by how long it takes. They just want to get back to their old life.

Megan Thompson: I wanted to ask about whether they're rebuilding in a different way in order to ensure that buildings and houses are built maybe in a more safe place?

Lizzie Johnson: So when it comes to building, the town has made some pretty major changes. Things like having the siting raised off the ground so that if the fire creeps up, it doesn't automatically back up the wall. Mobile homes have to have been built within the last 10 years. At the time of the Camp Fire, most homes were about 30 years old. So very flammable. One house caught on fire and that caused the entire block to catch on fire.

Megan Thompson: You talked about frustration over how long things were taking. I mean, what kind of help and aid is the town getting from the state and federal government?

Lizzie Johnson: There have been a lot of grants that have come in from FEMA, from the state, from the North Valley Community Foundation. Grants to help people rebuild, to get loans, to rebuild. But in the wake of a disaster like this, the need is just massive.

Megan Thompson: All right, Lizzie Johnson of the San Francisco Chronicle, thank you so much.