An island country in the Indian Ocean is the scene of today's first story.
The nation of Sri Lanka is reeling from a series of terrorist attacks that targeted churches and hotels on Easter Sunday. At least 290 people were killed and 500 or more were injured when the coordinated attacks took place.
Most of them happened in the same time frame, between 8:45 and 9:30 on Sunday morning. Suicide bombers detonated their explosives at three churches across the country.
At around the same time, more explosions took place at three luxury hotels in the Sri Lankan capital of Colombo. And later on Sunday, there was a blast at a hotel near a zoo. And a final explosion happened in a private house as police were raiding it in connection with the previous attacks. 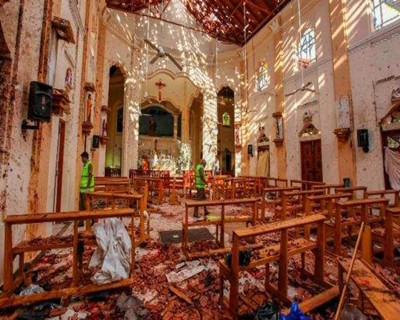 Officials don't know yet why Christians were targeted. Easter is their most important holiday but Christians are a religious minority in Sri Lanka. They account for about 7.5 percent of the population. Buddhist make up 70 percent. Hindus make up 12.5 percent. And Muslims make up a little under 10 percent.
The Sri Lankan government says it's concerned that an international terrorist group is behind the assault. When we produced this show, no organization had admitted carrying them out, but a Sri Lankan government spokesman says there were warnings days before that attacks that something was going to happen. And the government admitted yesterday that it failed to act on those warnings.